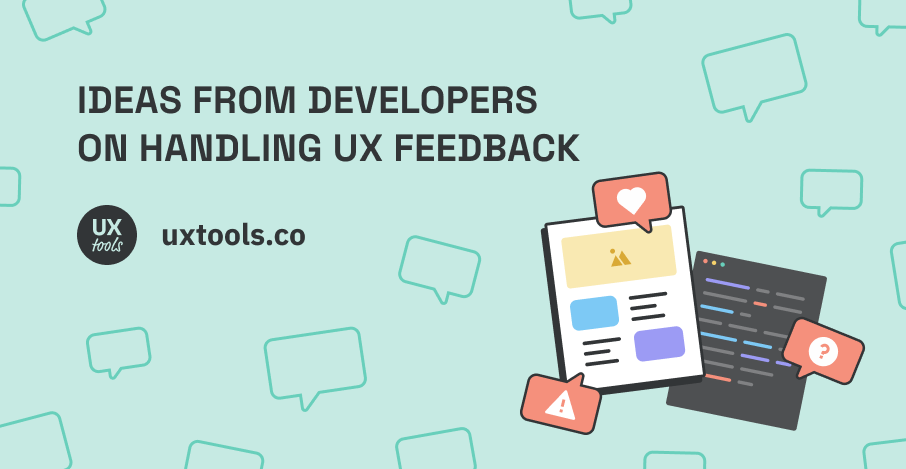 I recently wrote about what I learned from interviews with software engineers about their needs from UX research. In those self same interviews, I uncovered several insights about managing feedback from engineers.

Designers and developers have much in common. We’re two of essentially the most creative groups in software development. We’re each continuously creating recent things.

In that way, each teams compose a vital partnership value nurturing. Read on for highlights from my interviews of actionable takeaways to your team.

The design and development partnership

Designers should juggle feedback from several different inputs and stakeholders. One key stakeholder is the event team—the talented folks who will actually make the designs a reality.

I asked several developers what circumstances create friction within the design process. When do they feel to wish to back on designs? The responses were broad but additionally unified under a standard theme. Have a look:

Great engineers value the standard and integrity of the solutions they construct. They lookout for the nice of their craft—just as designers do when fascinated with our own systems and processes.

Take a second to think concerning the impact your design work has in your team (or in your whole company). Your designs dictate how engineers spend their time for the following several days, weeks, and even months. How that solution reaches a customer dictates the success of the business or organization. That’s an enormous responsibility!

It is sensible that the people and teams accountable for constructing an idea would have feedback on the way it’s planned and executed.

As one engineer explained, once they offer a suggestion it could “not even [be] a greater solution, but as a substitute, a strategy to reach the identical end result but have or not it’s half the trouble from the engineering team.”

I sketched out a fast idea for an A/B test experiment to hit a deadline. As I sent the thought over to the developer who could be working on it, he arrange a call with me to precise some hesitation.

He made great points about why the design wasn’t good for an A/B test. He even identified some details I had ignored while rushing. He proposed another concept that was, truthfully, higher. I’m glad he felt comfortable pushing back and helping me avoid what would have been a failed test.

Feedback must be constant, not singular

Recently in Jess Eddy’s UX Chat she mentioned that she doesn’t consider the developer relationship as a “handoff.” As a substitute she considers it a “continuous stream of communication.” Involvement from designers and engineers doesn’t start and end but as a substitute fluctuates and changes roles because the project evolves.

A note about availability

I don’t think this implies designers should should feel pressure to instantly reply to every email or DM. Designers don’t must at all times be “on call.” I do think it means designers must be opening that door as much as possible, and as early as possible.

As a project transitions from abstract to concrete, take into consideration a number of the different touchpoints in your team. Where are you able to inform others and invite feedback? Some examples:

For those who’re serious about learning why developers take interest in these touchpoints, consider reading my previous post on what developers need from UX research.

Why designers should want feedback from developers

I can’t be more clear than this engineer was:

“For those who can share the total context, data, and research behind a design decision, developers will understand and make it easier to make things occur.”

Developers are powerful allies. Among the most expert developers I’ve worked with were also fiercely defensive of their work and deadlines. Constructing a relationship of trust invites those developers to defend the belongings you care about too.

Imagine a development team that strives for accessibility, design system integrity, component architecture, and value. That dream is barely realized through mutual respect.

One engineer, when asked about pushing back on design, said, “I are inclined to move forward with the answer given—trusting that it’s been well thought through and with the belief that getting something built, learning from it, and iterating is frequently the perfect strategy to create a product.”

Did you catch that they “trust[ed] it’s been well thought through”? That it not a simple achievement. How do you earn that trust?

One in all the best and fastest ways I’ve found to construct trust on a team is to ask feedback after which immediately act on it.

Feedback is a chance to construct loyalty

Some engineers gave great advice for designers who could also be handling plenty of incoming feedback:

“Show the developers that you just are literally hearing feedback and if crucial meet with them one on one to speak about things further.”

Some designers may read that and and feel the panic of a really crowded meeting schedule. It’s as much as you to find out when a gathering is crucial. Don’t forget that a gathering may be as little as 5 minutes.

One other engineer gave an important tip: “If designer[s] have future plans to handle the difficulty, then let the team know.”

Responding to feedback is an art form by itself. These are just a few examples to point out you listened, the feedback is cheap, and also you’re willing to do the work to reply.

Designers are sometimes clawing for a seat on the table and demanding respect for design. What about development?

Because design and development affect one another’s time commitments a lot, mutual respect is essential. Some engineers wish to work together on this:

“If it’s a priority about development time, then work with the team to work out what other options can be found.”

Do not forget that responses about development time are concerning the good of the team, not only someone being contrary. For those who feel ward off, try to seek out where that’s coming from.

One other strategy to respect the event process is by understanding and appropriately utilizing correct conventions (similar to platform-specific patterns):

“Up to now the largest reasons for my pushbacks are when designs usually are not platform-specific.”

It’s one thing for a team to make a unified selection to stray from convention. It’s one other thing entirely for an engineer to be surprised by unexpected design decisions. Even when ignoring convention is the fitting selection, how are you going to share the context and knowledge that helps the engineer develop into an ally?

As you go down that path it’s possible you’ll discover something—designers aren’t at all times right.

It’s okay to be mistaken

Designers don’t should be flawless, creative geniuses to seek out success. As a substitute, they’ll depend on input and concepts from others to create something greater. Consider how these engineers prefer to work together:

“I do know my domain is technical and at times there are moments once I can use my knowledge of the architecture of the system to offer a greater solution.”

I read this as a really respectful way of claiming “sometimes designers are in over their heads and I’m completely satisfied to assist.” So allow them to!

One other engineer rightly identified, “if the objection is real and [a] designer missed some[thing] then accommodate the changes.” This one is pretty straightforward. If the feedback is correct, just do it!

Repeated displays of being willing to work together can step by step improve each interaction the team has. If the remainder of the team returns that very same favor to you, you’re probably going to have a great time on that team.

Not every team strikes an ideal, harmonious balance of design and development unity (I’ve had my justifiable share of adverse teams). For whatever reason, developers and designers often—and unnecessarily—antagonize one another.

These insights reveal one other side of the story. I feel these two teams have the identical goal and need to support one another in reaching those outcomes.

For those who found these insights useful, I hope you’ll consider showing some love or sharing on Twitter:

Why do developers and designers clash on some teams, but not on others? I feel the reply lies somewhere in the attitude of the team.

I got down to learn by putting on my UX hat and, you already know, talking to developers. 🧵